Upsides to the Down Economy/ Final Posting 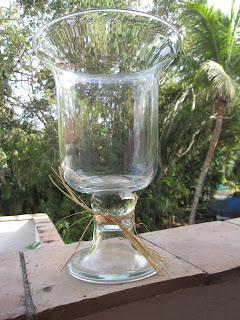 Well, I haven't blogged in over a month, which brings me to the topic of my last blog for this blog. Blogging lately has become more of a chore than a joy. When I spoke to a counselor this year, she kept asking the question "And how does that serve you?" which was quite aggravating after the third or fourth time. Like "That made me mad!" and she would say "And how did that serve you?" But basically, it was another way of saying "So how's that working out for you?" If it's working, keep it;.iIf it's not, lose it. And so, this blog, which started out with a fascination that people out there in the world wide web could actually read my words moments after posting, and with much enthusiasm and glee, has dwindled down to something in the back of my mind I feel guilty about if I don't post regularly. So, to use the shrinks lingo, it's not serving me anymore.
While I thought "Upsides to the Down Economy" was a good idea for a blog, it did actually incorporate a negative (Down Economy). I have had fun these last couple years blogging about food, finances, entertainment, ways to save money, philosophical meanderings and just stories of my past. So, with the old year, I say goodbye to this blog and perhaps I will start a new one. I would like to concentrate in the future on travel writing, inspirational writing and screenwriting. And, to end on a positive note, I would like to share an idea someone posted on facebook. Take a big empty jar, vase or bowl and each day write down one good thing that happened to you that day. At the end of the year, you will have a jar full of little bits of gratitude to be thankful for. And best of all, it's absolutely free. The best things in life often are.
Posted by Gleesganders at 11:41 AM

I hope you are doing well. I got the chance to read a wonderful story named "Getting to know Jennifer," from the 'Food and Love' book of the Chicken Soup for the Soul Series. The story was written by Gina Lee Guilford, but I am not whether or not you are the same writer who wrote the story. The story, however, touched my heart and soothed my soul in a very positive way.

Blessings to you and your family,
Hamza Hassan
Saudi Arabia

Well, yes, just reading this post two years later. I am the one who wrote that story. I am glad it helped you in some way. Gina