Upsides to the Down Economy/ A New Year is Yours! 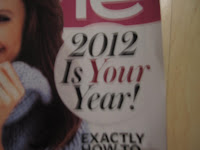 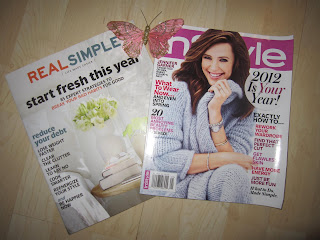 Don't you love a new year? Say goodbye to the regrets, worries and mistakes of the old year and look, with fresh eyes, to the future. Even the magazines get in on the act, declaring 2012 is Your Year! with strategies to "rework your wardrobe, find that perfect cut, get flawless skin, have more energy and just be more fun" (In Style). Or Real Simple can help you to "reduce your debt, lose weight faster, clear the clutter, learn to say no, cook smarter, reenergize your style and be happier now" - all good goals. I have not made New Year's Resolutions this year, except for this one- to start being the person I want to be. Not to take a pass and say "Next time I will...". Next time is here, the future is now- to be stronger, more compassionate, more loving, more disciplined, more forgiving. Carpe Diem!
Posted by Gleesganders at 4:57 PM No comments:

Labels: Upsides to the Down Economy/ New Year/ 2012

Upsides to the Down Economy/ Quinoa- The New/ Ancient Superfood 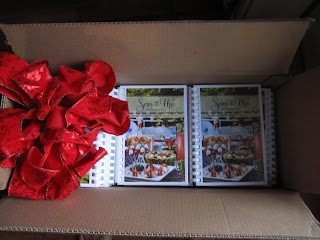 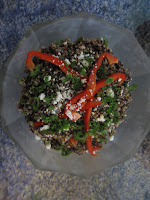 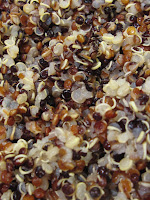 There's a subject I've been wanting to write about all year, so I need to write it NOW, as time is running out on 2011! The subject is Quinoa, the super-food, new grain that every one's talking about. While it seems new to us, it actually was cultivated hundreds of years ago in the Andes by Inca farmers. Pronounced "keen-wa", this food was known as "the gold of the Incas" and was used to increase the stamina of their warriors. Although considered a grain, quinoa is a relative of spinach and Swiss chard and is actually a weed related to lamb's quarters. It is high in protein, but more than that, it is a COMPLETE protein, meaning that is includes all nine essential amino acids, making a great choice for vegetarians or vegans looking to add protein to their diet. It is also well endowed with the amino acid lysine, which is essential for tissue growth, making it perfect choice for athletes and weight lifters. Quinoa is a good source of magnesium, folate and phosphorus and is also helpful for people who have migraine headaches or diabetes. What's not to love about Quinoa?
In addition, it cooks quickly and is now available in regular grocery stores, making it easy to become part of your everyday eating. Quinoa has a fluffy, creamy texture and nutty taste with a slightly herbal aroma. I first tried it for breakfast, sweetened with maple syrup. It was good, but eating just a big bowlful of it was slightly boring, so I added toasted pecans and raisins to give it some texture. I also tried mixing it in my steel cut oatmeal, for a nutty flavor with a mix of textures. Since it goes bad quickly, you should store quinoa in the fridge and toast it for the best flavor. It can be substituted for bulgur or rice in recipes for pilafs or salads, or sauteed with onion and garlic and stuffed in a pepper for a vegetarian entree. I made a recipe from our new Serve It Up! cookbook with black beans and it was delicious. By the way, our new cookbook with lots of great recipes is out now. It is $15 and is a fundraiser for Autism. If you would like a cookbook e-mail me at gleeguilford@bellsouth.net. It will be a couple extra dollars to ship it.

Labels: Upsides to the Down Economy/ Quinoa/ Serve It Up/ Quinoa Recipe

Upsides to the Down Economy/ The Usual Suspects 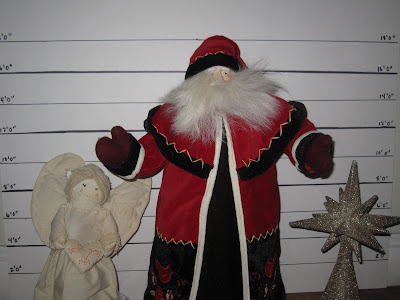 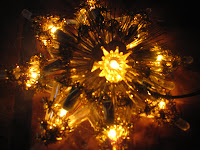 When I got married six years ago, my husband and I blended families and with that blending came blending Holidays. Since both our families live in Miami, there was a lot of negotiating/compromising to do. After the first year where we ate two identical Thanksgiving dinners in a row, we said "never again" and rotated Thanksgiving. Christmas has been more of a challenge, since his family "had" Christmas Eve AND Christmas morning and my mother had started a tradition of Christmas Brunch. This configuration resulted in eating a huge Southern breakfast at his Dad's house, and then hitting my Mom's house for another feast (which I could barely look at, much less eat). I suppose it could be said to be a good thing to have TOO many places to go on the holidays, but it often seems stressfull and full of divided loyalties. I realize this doesn't seem like a very cheery Christmas post and I digress from the subject I wanted to cover which is Christmas toppers.

This has been another topic of discussion/compromise in our household. The Christmas skirt rotates from His to Hers each year, so that's easy enough, but the Christmas topper- not so easy. I had an old fashioned muslin angel I handmade many Christmases ago, but it seems too dowdy for the big tree we now have. My topper from my first marriage was a gold star that lit up with tinsel (which is the same type I had growing up) but now it just seems tacky to me. I bought another star from Pottery Barn, which I like, but Zeke doesn't. It looks kind of like a Moravian star, but if the branch at the top isn't completely straight or is too long, it doesn't work. In trying to find a topper to be "ours", we bought a star, that lit up, at Target. We didn't notice it in the store, but when we got it home the filaments changed colors constantly, making it more like a disco star than anything every seen in the East, so we took it back. Zeke's sister-in-law Kathy sent a beautiful, large velvet Santa that may be our favorite, but I had it out for so long trying to write this post (with photos) that it's now sitting on our coffee table and our tree top is bare. All of this barely matters, I realize, but when you talk about traditions and the like you are dealing with: past memories, feelings and emotions and sometimes, beyond reason, it erupts in a fight about the tree topper. If any topper is the perfect one, it may be the star. I saw one advertised in the Sky Mall magazine as a perfect non-denominational topper, for any religion. And so the hunt goes on.

Labels: Upsides to the Down Economy/ The Usual Suspects/ Tree Toppers

Upsides to the Down Economy/ Homemade Limoncello 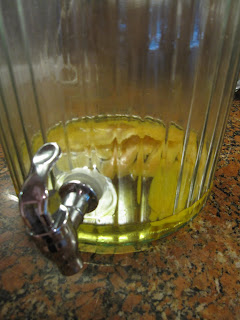 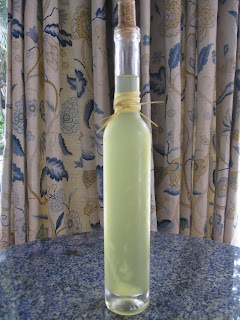 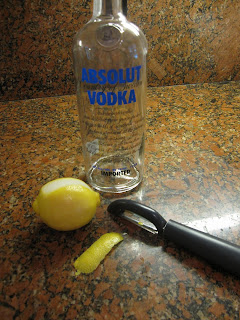 We had dinner at a friend's house the other night and I wanted to bring a thoughtful hostess gift. A bottle of wine is always an option, but I wanted something a little different that reflected some thought in the matter. Since we were having an Italian meal, I decided to make Limoncello from scratch. It is not very hard, but you do have to plan ahead since it needs at least 5 days to make. I made the Limonello (recipe to follow), poured it into an empty wine bottle and tied the recipe to the bottle with some raffia. Voila! A thoughtful and delicious gift, enough to sample at the dinner, with plenty left over for our host and hostess. I loved this idea so much, I put some grapefruit peels (we got a basket of grapefruit for Christmas from a friend) in a beverage server and covered it with vodka. Inspired by the Organic Sunshine Martini at Season's 52, the vodka absorbed the flavor of the grapefruit, making it citrusy yummy! I added some fresh grapefruit juice and simple syrup to make my martini and it was delicious.

Directions
Using a vegetable peeler, remove the peel
From the lemons in long strips (save lemons
For another use). Using a small sharp knife,
Trim away the white pith from the peels;
Discard the pith. Place the lemon peels in a
2 quart pitcher. Pour the vodka over the peels
And cover with plastic wrap. Steep the lemon
Peels in the vodka for 4 days at room temp.

Stir the water and sugar in a large saucepan
Over medium heat until the sugar dissolves,
About 5 mintues. Cool completely. Pour the
Sugar syrup over the vodka mixture. Cover and
Let stand at room temp overnight. Strain the
Limoncello through a mesh strainer. Discard the
Peels. Transfer the limoncello to bottles. Seal the
Bottle and stick in the freezer, at least 4 hours and
Up to one month.
Posted by Gleesganders at 9:04 AM No comments:

Upside to the Down Economy/ Have a Charlie Brown Christmas 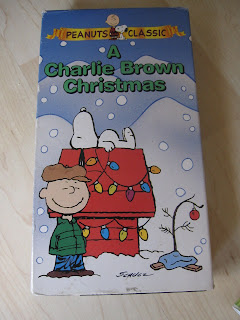 I heard an ad on the radio the other day for a jewelry store promoting diamond earrings for Christmas. It was about how the wife opened the box and found the diamond earrings, inserted them and they made her face light up and she become beautiful. It made me think about the commercialism of Christmas, how the real gifts we can give are ourselves- our time and love- and what really makes a woman beautiful is not two rocks on either side of her face, but what is within. A mother holding her baby for the first time is beautiful, a mother holding her toddler's hand while she gets a shot is beautiful, a mother letting her teenage daughter drive, while she white knuckles it is beautiful, a mother doing what is right for her children and making painful choices is beautiful. Don't buy into the myth of getting the perfect gift to make the perfect Christmas. The perfect Christmas lies within.

" Your most precious, valued possessions and your greatest powers are invisible and intangible. No one can take them. You and you alone can give them. W. Clement Stone
Posted by Gleesganders at 5:46 AM No comments: